Sign up here to receive our newsletter
A Wee Dram...

Burns Night is a festival which celebrates the birthday of Scotland's most famous poet, Robert Burns. He was born on 25th January 1759 in a village called Alloway in Scotland and produced hundreds of poems, songs and letters.

On his birthday it's traditional to hold a Burns Night Dinner and celebrate with Scottish Dancing, Whisky, Haggis, Tatties and Neeps.

...read on to find out more about whisky, how to create a delicious whisky cocktail and a whisky and cream sauce to serve with your  Burns Night supper!

Partridges have a wide range of delicious whiskies for you to choose from (and you'll find Haggis in stores) and help oil the ‘reeling’ wheels this Burns Night!

WHISKY CAN BE INTIMIDATING. Not only can it be an acquired taste – and one that embodies a sort of machoism – there is also a plethora of distinctive styles, flavours and prices to consider.

But let’s start with the basics. Who is making this stuff and what are the main differences?

“Whisky is made all over the world, but the most famous country by a long way is Scotland – where the main styles are Single Malt, Grain and Blended,” explains Xavier Chapelou, Partridges’ master sommelier.

“The USA is a very large producer too, making Bourbon, Corn, Rye, Tennessee and Wheat. Most of the differences in the style of whisky are due to the type and percentage of grain used. Also, the type of barrel, water, yeast and distillation play their part too.”

So far, so simple. Chapelou tells me that what you should look for depends on what sort of flavours you like. “Some people like the distinctive flavour of a single malt, whilst others like a more subtle and smooth blended whisky. Some prefer the rich peated profile which comes from Islay.

“Personally, like every drink I choose, I always go for a whisky with great balance and a distinctive but refined aromatic profile; not too smoky but not too mild either. The alcohol sensation should be smooth, not rough. Recently, we have added a new range from the St George’s Distillery in Norfolk, which is a wonderful option.”

Chapelou says that novices should go for a whisky from the lowland region of Scotland – something like an Auchentoshan – where the drink tends to be soft and delicate; or “a rare bottle from the Rosebank Distillery”, which Chapelou says tastes spectacular alongside Partridges’ smoked salmon.

Of course, there are many classic and famous brands to try that, according to Chapelou, always do well; these include the likes of Glenmorangie, Laphroaig and Dalwhinnie. He recommends Monkey Shoulder, which he considers “amazingly smooth” – perfect as the foundation for an Old Fashioned.

But, what if your knowledge extends beyond the most recognised names? He says that as beginners become more experienced, softer whiskies often make way for more heartier options. “Connoisseurs may prefer a medium to full-bodied whisky with a smoky character, like Lagavulin, Ardbeg or Bruichladdich from the Island of Islay.” These often partner well with rich, velvety dark chocolate.

Chapelou says that a smooth and delicate 21-year old Balvenie, distilled in Speyside and with a Port Wood finish would stand up well against Cremoso al Tartufo cheeses, which are exclusive to the Duke of York store.

If your growing passion for whisky leads to the collecting of special bottles, there are a few tips and tricks you should observe to save heartache in the future.

“Keep bottles away from direct sunlight or vibration, as these could damage the taste and aromas,” says Chapelou. Unlike wine, whisky is best kept upright – and, as whiskies are aged in the cask rather than in the bottle, there is no sense in waiting for more developed flavours. “There is the controversial ‘old bottle effect’, which might impact the aromatic profile of a venerable bottle of whisky – but only over a long period of time.”

HAGGIS, TATTIES & NEEPS:
Haggis is the national dish of Scotland and whilst it is served throughout the year it is especially popular on Burns Night.

Haggis is a savoury sausage that is made of sheep's heart, liver and lungs that are minced with onion, oatmeal, suet, spices and salt. The mix is then traditionally encased in the animal's stomach.... it's nicer than it sounds and you can also buy vegetarian and vegan haggis!!

Tatties and Neeps are simply mashed potatoes and mashed swede (...or sometimes turnip).

For the whisky sauce, should you wish to make it:

Start by softening the shallots in the butter in a large saucepan.

Add the whisky and turn up the heat to burn off the alcohol, this won’t take long and will avoid any bitterness. Reduce the heat and stir in the cream. Allow to simmer for a couple of minutes.

Serve the haggis on a plate alongside the mashed tatties and neeps and have the whisky sauce on the side. ENJOY

Embellish with a lemon wheel & a cherry.

Cotswolds Single Malt Whisky is the first whisky ever distilled in the Cotswolds. They use 100% locally grown, floor-malted barley and mature the whisky in first-fill ex-Bourbon barrels and reconditioned red wine casks. Rich, fruity and sippable with notes of honey, Seville orange marmalade and dark red fruits.

Enjoy your Highland Fling, at home! 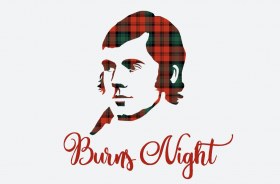 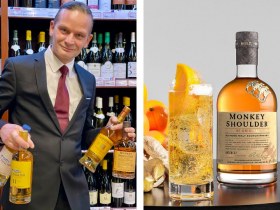 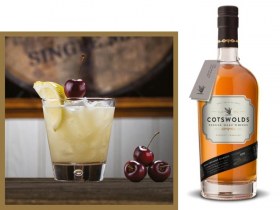 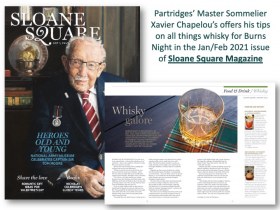 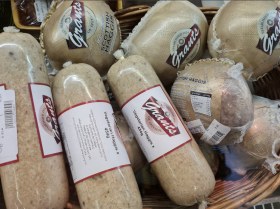